What do you do when you feel blah? When you want to do something different or challenging?  I go to a different SCA event. This time I went to Bardic Bedlam.

Bardic Bedlam is a long day, bardic sharing event held each year. It is named after the book series with a similar name. Entertainers from all over the kingdom came to the Lonely Tower for this event. For its classes, challenges, and late night bardic circle.

This event welcomed everyone: talented, shy, entertainer, patron or student. All performing artists attended. Bards, Minstrels, Jesters, Jongleurs, Troubadours, Poets and Patrons. Yes, patrons. Patrons are important because you aren’t an entertainer without an audience.

At Bedlam, there were new things you could do. You could attend classes and roundtables to learn how songs were composed or medieval music notated.

There was also Cristina’s food to eat. 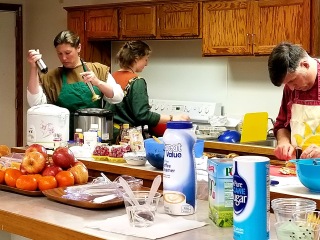 HL Cristina la Ambeler and her cooks’ team provided food throughout the whole day, from start to late night’s end. No matter your taste Cristina had something tasty for you to eat. Meat or no meat, and gluten-free. If you had allergies or questions she replied to your email before the event. Cristina loves to cook and serve Calontir’s people.

You could pick from the following menu.

There were so many options. I ate the Chicken Tikka Masala. With that Cristina hit the sweet spot blend of spicy and flavorful. Its savory moist chicken chunks were scrumptious bites to slowly devour. I ate it with her saffron rice. Together they were the best.

Well worth my free-will donation and more.

At the noon hour flytes were held. Since I’m not a bard but a patron I learned something new. A flyte is a challenge set by a bard for others to try something new. Something you might not otherwise have tried. It may be made to be done off-the-cuff or with prior composition. After the bard performs the challenger gives them a small gift, a thank you for entering. There’s no judging, no winners, or need for something presented to be “good enough”. And if you enter you receive a token of appreciation.

This year’s Bardic Bedlam flytes and their sponsors were:

If you aren’t a teaching or bardic type and want to encourage the bardic growth of others consider sponsoring a Flyte yourself. 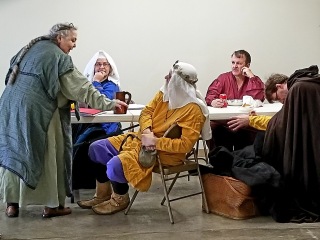 After the flytes there were more classes. As a newbie, I enjoyed HL Volu-Ingibiorg’s Chorus Class. In it she taught you the chorus to several popular songs sung a Calontir post revels, campfires or walk to the battlefield. Knowing a songs verse lets you join in the fun, plus they’re easier to learn than verses.


For another bit of silliness, the Baron and Baroness, Augustin and Aleit, walked us a block to Springfield Drug to have our pictures taken with their oversized Simpsons characters.

The drugstore also has an old fashion working soda fountain, so we each bought our favorite ice cream treat. Mine was a chocolate fudge sundae. Made me feel like a kid again.

After ice cream, we returned to the event. It was time for Baron Augustin and Baroness Aleit to hold their court.

First business was Ly Zafara Baabur thanking all that participated or helped. Zafara became the site steward when M. Dolan was hospitalized unexpectedly. M. Dorcas Whitecap stepped up and finished organizing the classes and flytes. 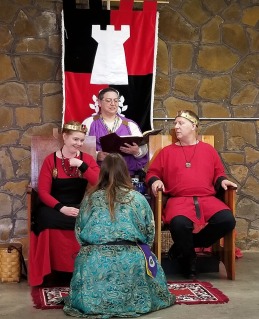 After court activities continued, but I, unfortunately, could not stay. Like Cinderella I returned home, picking up my dogs from the Petsmart Hotel on the way.

Dinner was food you ate with others while more flytes challenges were held. Those flytes and sponsors were:

After the challenges, songs and stories continued in post-revel style. They ended as is common with bardic circles when the last Bard standing had no more voice to sing.