What Shakespeare Can Teach You About Winter 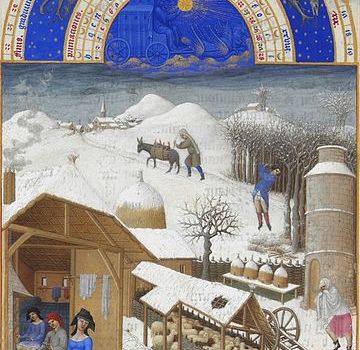 Did you ever wonder what winter was like for people olden times? Shakespeare gives you a clear look at what it was like for him.

Why You Should Love Your New SCA Persona

In the SCA - if you're lucky - you take a favorite persona the first time you try. If it doesn't fit your expectations, there's no reason you can't take a different one. There are a few things to know before you change. 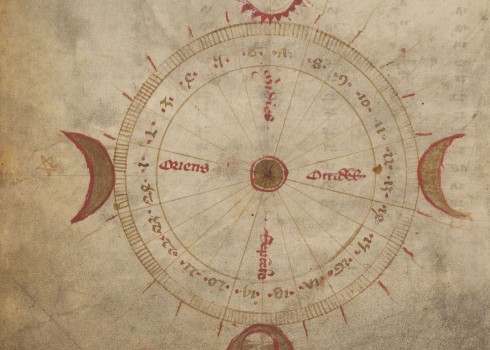 Diagram from the German Arundel 501 f. 26v  to determine feast days  and the moon’s age. Tonight there is a full moon. But if you, as your persona, lived after 1100 you probably considered the moon to be a planet. If you thought about its movements at all you thought it revolved around the Earth in a perfect circle. Just like Mercury, Jupiter and even the Sun […]

I detest winter. Not just the cold, but also the dark. I live like a mole until March. But with 24-hour supermarkets and drive through fast-food I survive until the sun returns. Do you have the same aversion?  With all the modern conveniences it’s easy to forget the once great effort it took to survive winter. Preserving autumn’s harvest and fully stocking larders for the long nights and short days. What did our medieval forebears do to survive their barren, cold days? One way you can see their wintry concerns and activities are through Breviarys, Books of Hours and Psalters‘ calendar pages.  Medieval manuscripts’ calendars served multiple purposes. They kept track of the date. They told you what the relevant zodiac sign was and which days were Church feasts and holidays. And since most were decorated with seasonal ‘labor of the month’ pictures you can see what people did then. Their daily life.   My daily life this winter, after Lonely Tower’s coming 12th Night Event, will be to head south for a time. To break the dark, cold monotony and learn something new.  What do you do to survive winter? What would your SCA persona do? Related prior Posts:  Searching for Easter Week in Illuminated Manuscripts Related External Sites:  British Library’s Medieval Manuscripts’ blog posts on calendar pages. My favorite. National Library of Sweden’s detailed discussion on calendars. Googling medieval calendars images. This often gets more than you expect.

Can Jehanne Read And Write?

I think Jehann a 15th Century Burgundian woman could read and write. Here I tell you why and the reasons I believe it.

Why I’m Thrilled With My New Found Interest – Finding Jehanne

Link If you are like me and it’s expensive to get away from your home group you might try upping your activities there. That’s what I’ve done. I’m still doing my usual blogging and helping with kingdom events the Barony of the Lonely Tower hosts. There’s always one or ten handcraft projects to do. But my new passion is developing more fully my Jehanne Bening persona.  About 2008 or so, I became Jehanne Bening from 15th-century Bruges after starting my SCA life as Siobhan le Blake from early 14th-century Galway, Ireland. I made the change because I couldn’t then find any female illuminators in Ireland. That’s about as far as I went with it until now. I’m so excited because I recently learned even my ancillary interest areas fit within that persona. There are records of women illuminators in Bruges guild logs. And a note of one living in the Beguinage there. That fits Jehanne.  I found that information reading the tome Illuminating The Renaissance: The Triumph Of Flemish Manuscript Painting In Europe. Edited by Thomas Kren and Scot McKendrick and published by the Getty. This beautifully photographed catalog tells about the finest illuminated manuscripts created in Europe during the greatest era of Flemish illumination, the reign of the Burgundian duke Charles the Bold. It begins in 1467 and ends in 1561 with Simon Bening‘s death. Jehanne was born in 1439 and lives as many years as I do. To me, this is illuminations grandest epoch […]

While writing my recent post “How to Find the Script Your Persona Might Have Used” I came across an article relevant to Jehanne Bening, my SCA persona. The article described a manuscript production method used in Bruges and Delf. Would this have affected Jehanne’s illumination or life style? Jehanne is from the town of Bruges in the Duchy of Burgundy and works in the Sanders Bening workshop. Sanders, who died in 1519, was the father of the well-known illuminator Simon Bening. And his workshop produced many fine things for the Dukes of Burgundy. Around the 14th-century literacy increased and the new urban classes wanted affordable books. Manuscript production methods changed to accommodate this. The personal Book of Hours developed during that time. It contained fewer standard texts than the formal Psalter with some sections chosen by the buyer. The Book of Hours also differed in use from the Psalter. It was not always read from beginning to end. A section might be selected by the reader as needed or inspired. More whimsically. The Hague, KB, 71 H 56 fol. 1r In some areas, manuscripts became created by modular construction that divided labor efficiently. This benefited book owners, who could pick desired texts for their manuscript and expand or change their book after they bought it if they chose. They could also be made “generically” for an undetermined future buyer. More books could be sold and more money made for the manuscript producer. The modular production worked well when making a Book of Hours because their sections were individually chosen and […]

How to Find the Script Your Persona Might Have Used

In Russian Persona Recently on the SCA Scribes Facebook page, I came across the question “What script would my persona have used? The short answer is, “it depends.” Of course, there’s more… So my newest readers know, an SCA persona is “the fictional person you wish to have been, had you lived prior to 1600 A.D.” It embraces your name […]

M. Rolf in stealth mode. I’m a skilled stalking scribe, researching the recipient’s SCA persona and related interests. It scares me how adroit I’ve become. Facebook made this easy. I can snag scroll motifs from the recipient’s photos. Pictures of pets, garb, crafts, family. I no longer have to sneakily talk with their seneschal or friends about their interests. Things […]