I’ve been posting information relating to the making of a scroll I can now show. How to Google For Illuminated Manuscript Inspirations, My Battle With Calligraphy, and 5 Tips To Train Your Artist Eye all sprang from my efforts to create this scroll. 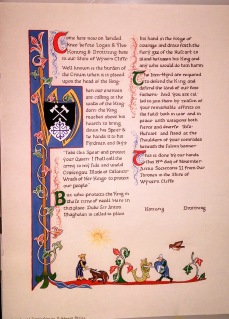 The scroll is an Iren-Hirth for the Duke Sir Anton Rhaghelan. That alone is special because the Iren-Hirth is a mid-level combat award being given to a knight and former Calontir Monarch.

Sir Anton came to Calontir from another kingdom prior to becoming our beloved King. He didn’t come up through the Calontir fighting orders. Receiving this honor, the Iren-Hirth, officially makes him a Calontir Huscarl. A treasured membership in Calontir.

The current Monarchs are Norse, so blending their personas with Duke Sir Anton’s 14th century persona was a trick. The inspiration itself, the Icelandic Flatey Book, a challenge for its unrefined quality.

My creative attempt adapted the Flatey Book’s colors, double columns, a split enlarged decorative versal, other colorful versals with filligree, vines, and selected relevant images for a bas-de-page. The sun, falcon, and water are references to the oath TRM Logan and Ylva swear to peers during their reign. Of course I added the order’s heraldic arms and included Sir Anton’s in the bas-de-page.

I hope the scroll looks like a refined Flatey Book page to you.

The Viking Archive
Maidens and Manuscripts: Taking a fresh look at people and events from 1347 to 1625, with a focus on women and illuminated manuscripts
The Falcon Banner