This year I did things differently. Saturday, June 10th,  I set up my camp and spent a day enjoying its wondrous sights and fun. Then visited high school friends for a few days before returning to the War.

In the early evening, Their Royal Majesties Ashir and Ashland held opening court on the battlefield. Their focus was under the Royal Pavilion. Most of the populace gathered under shade. Unfortunately few chose to fill in the center space, preferring to stand rather than swelter. 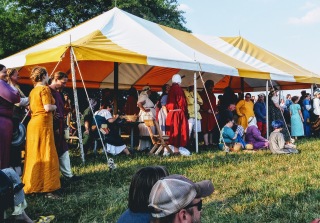 The temperature was near 90, with humidity seeming the same. The blessing was the blustery wind.

Four AoA level honors and the Order of the Silver Hammer were presented before Robert Brockman was made a Court Baron and Jurgen Weiter von Lanstuhl was welcomed into the Order of the Laurel. I was honored to have done his Laurel scroll.


I walked about camp a bit, talking with friends from across the Kingdom of Calontir and the Known World. I turned in soon after dark, being tired from the fresh air, a day’s work and walking. Proud of myself for trying this one more time.

I love mornings – It’s my favorite time to take camp pictures as I walk to Odyssey Coffee for my morning joe.


Each year brings a different Lilie’s experience and I try to capture distinct photos too. Some happen on their own because of changes to the event such as court being held in a different location or the days I’m able to attend. 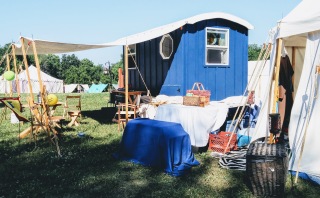 Here’s something new. I’d heard about H.L. Bietriz la Cristaliere‘s vardo. It’s the first time she’s had it to Lilies. These are becoming more common as I took a picture of a camp home on wheels last year.

This item is interesting for its creativity in hiding or adorning an inflatable kiddy pool. A great way to entertain the tots and cool their visitors’ feet.

Breakfast for some includes a Mid-evil Burrito. These awesome concoctions are sold at the only vendor open for breakfast. Thankfully the food is good and the owner fun to talk to as he prepares your order. 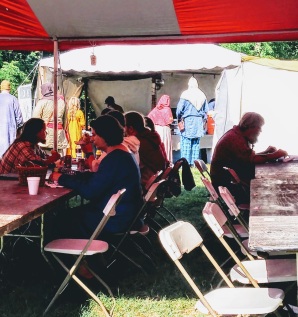 The food court is another place I commonly find chatty friends. The subjects vary widely and opinions easily shared.


Next, I wander over to the “new merchant” area. It’s been there many years but was named that when the merchants divided up, some staying in the original “old merchant” area.

Besides selling wares many merchants are seen doing their craft and sometimes teaching others their trade. I tried to catch the merchant’s sign in my photo. but sadly missed some. Let me know if you recognize who they are. I’d love to give them credit. 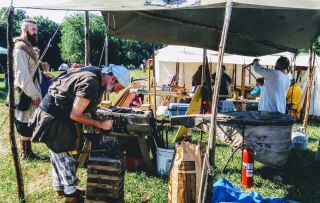 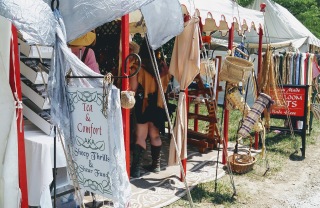 After wandering around and taking merchant photos I went to the Royal Pavilion for an Order of the Laurel meeting. Of course, I took a few photos on the way.

This appears to be court held on the field. While I couldn’t hear, The Falcon Banner reports six honors were presented on the field that day.

But on to the Laurel meeting.

After the noon meeting, I went back to my tent and got ready to leave the site for a few days. It’s a two-part vacation for me. Lilies and Long-time Friends.

My next few days were spent in air conditioning, with a comfy real bed, TV and my best high school friends.

After a few days with my long-time friends, I returned to Lilies on Wednesday. Just before the turnoff to the Kelsy Short Youth Camp there’s a trailhead with parking. I took this photo there. Calontir tents and reflections as seen from across Smithville Lake.

Returning to my campsite I found I was lucky. It rained this morning, but my tent had little to show for it. I unloaded the ice and a few more items. I put my tent back up and changed into my coolest SCA camp clothing, Norse-style white cotton. The next few days were expected to continue hot and humid. I drove to park my car and walk back.

I bought a slushie at Odyssey Coffee and went to check on my friend HL Astrid. She’s merchanting and asked for someone to spell her a few hours a day. That was my plan.

When I got there she wasn’t of a mind to leave her tent for long. She’d spent the morning setting things back up after the storm knocked them over. We visited and she went for a quick shower.


Then she asked me if I would please take her money and buy her dinner at the food court. She was too tired to walk to it. She offered to buy mine, too. That was kind, but I didn’t think I’d done enough to earn it. So I walked for her.


Returning with her food, we shared a meal. Afterward, I walked to my camp and picked up my chair to head to a late evening Grand Court along with others.

I took a few audience pictures while we waited for Grand Court to begin. This was about 7 PM, so the sun was sinking beyond the tents. The temperature was cooler, but my pictures weren’t so cool.


Their Majesties Calontir had visiting Royalty who shared court and Their sun-shade with them.

I was able to get some closer court pictures during Mistress Sorcha O’Riain’s Laureling ceremony. I try to be sneaky, and unobtrusive. I don’t know how well I succeeded.

After court, it was party time. Unfortunately, it was too dark and busy for me to get quality photos.

Thursday morning, after overnight raing again, I’m up and walking.

This morning was similar to others I’ve described so I won’t describe it.


In the early afternoon, the Calontir Scribes’ Guild met and I attended. The heat and humidity made us all dripping and disheveled. I didn’t take the scribes’ pictures.

After the meeting, I went to my tent. I cleaned it and then visited with others from Lonely Tower.


In the evening I went to the Ladies of the Rose Tournament. 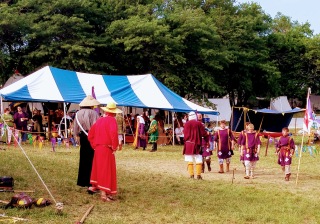 Preparations for the tourney. 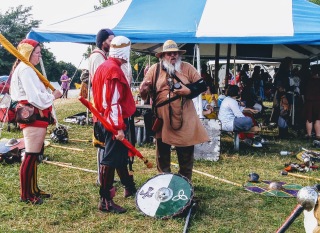 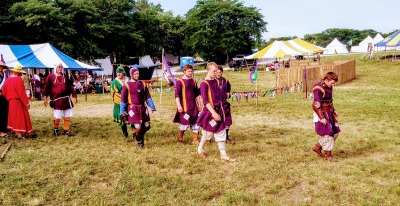 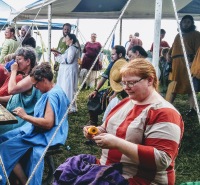 Waiting for the first combatants.

The tourney was progressing slowly and daylight was waning. So I walked around the old merchant area and went for dinner at the food court. I was scheduled to sit at the gate from 8-10 pm. I missed some great fighting by torch light, I heard later.

After sitting we use to call “troll”,  I went to my tent. This would be my last night this year. My free house/dog sitter needed some time to herself before going back to work on Monday.


I’ll work on better Lilies War scheduling for next year.