Years ago I entered my first competition with an illumination. In my documentation, I wrote about using tracing paper to transfer the image. One judge commented on my lack. I still remember how down it made me feel.

The way I handled that, as I often did, was to go to the library and research. In June 1997 I wrote “Medieval Clipped Art?” which was published in the Lonely Tower newsletter, The Banner.
The best detail regarding period tracing, not reusing motifs, is Christopher de Hamel’s comment in Medieval Craftsmen:

…there is good evidence that compositions of miniatures could be literally traced from one copy to another using carta lustra [tracing paper]…or could be duplicated by ‘pouncing’ in which the outlines of the original were pricked with rows of holes and placed over the new page and dabbed with a bag of colour, such as charcoal dust, to produce a dotted line. (p.57)

De Hamel also comments on it in The British Library Guide To Manuscript Illumination (p. 62) He believes there is tracing evidence as early as the 9th century, even having both the model and its copy.

James Farquahr in Creation and Imitation describes four tracing techniques used by 15th-century artists. They are:

Farquahr gives two recipes for carta lustra, also writing it could be bought ready-made. He mentions the use of linseed coated paper. But he thought the best period “tracing paper” was exceedingly thin vellum.

The first is to have a stationer scrape “kid parchment…until it barely holds together” is even and transparent, then thoroughly rub it with cotton soaked in linseed oil. Let it dry several days. (p.13)

The second is to “get fish glue and some leaf glue, which the druggist sells”, soak and boil them, and strain. Then brush this onto a clean marble slab and let it dry.Then peel it off as a sheet like we did with dried Elmer’s glue as kids. Then use it for tracing.(p.14) 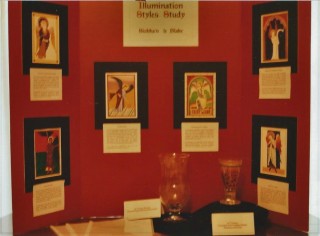 With many tracing options recommended for budding artists in the Middle Ages, what is the best criteria to judge a scribe’s work today?

In my Calontir Kingdom Arts and Sciences comparative study entry, I used multiple design methods on purpose. I used pricking and pouncing, tracing, copying with a grid, and drawing. Each work was documented individually and displayed side-by-side to compare styles and results. I am confident using any method. They each serve a purpose.

Today my scribal works are award scrolls. I use a combination of lightbox and free hand drawing. As a production scribe, the goal is to get a well done, period style scroll that relates to the recipient’s award and persona by the deadline.

I agree with Cynric of Bedwyn (Robert Ferrell). He aptly posted on the SCA Scribes FaceBook Group December 22, 2016 “Art comes from your heart and your spirit. It has nothing whatever to do with your chosen technique.”

P. S. Fortunately those old newsletters have recently been put online in pdf. To find it, if you choose, click here. Next click on June, Arts and Sciences. It’s on page 19.

A Layman's Guide to the Viking Age

Taking a fresh look at people and events from 1347 to 1625, with a focus on women and illuminated manuscripts

Poetry and Research of Ki no Kotori