Pointed Metal Pen Nibs: Not As Old As You Think

I’ve been searching all over the web for a metal pen picture I know is out there. It seems to have gone the way of some other historic metal pen pictures. If you’re like me you’re another scribe wanting to know metal pens and nibs are pre-17th Century.

While metal pens and nibs have roots in ancient Egypt where they were made of copper or bronze those did not have the writing quality of their common reed pens. All the way through the 18th-century metal pens seem to have been made as unique or luxury items.


If you’re curious, Ian the Green has more information you’ll want to check out on pre-17th Century metal pens. 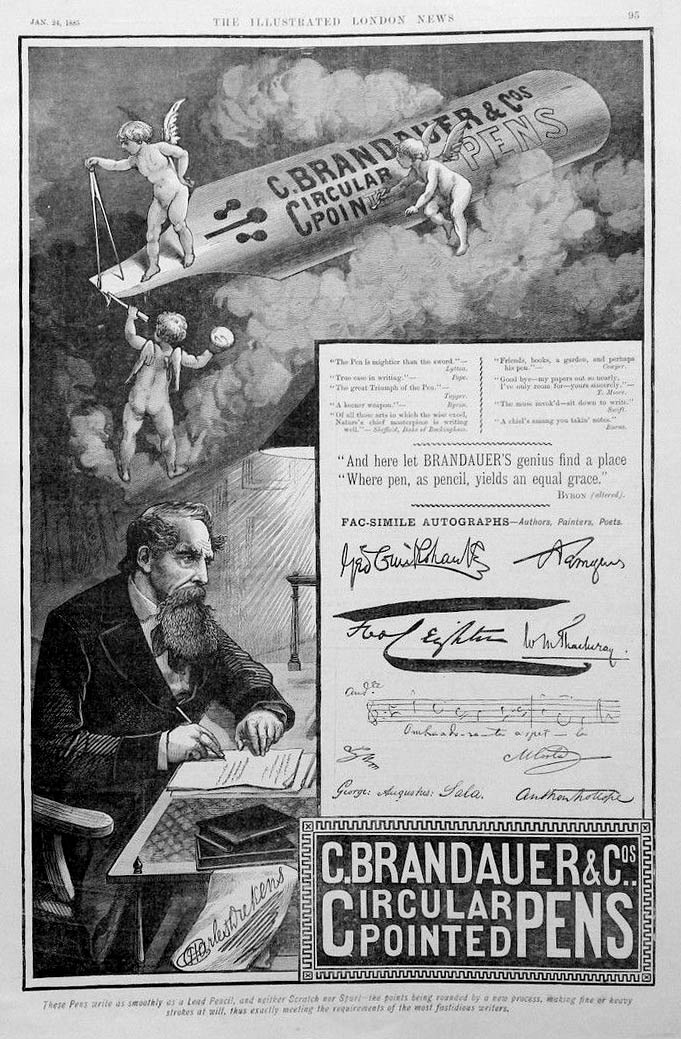 The pointed metal nib’s flexibility creates thick/thin strokes in a different manner than a does a quill. Instead of changing the nib alignment on the paper to change the line’s thickness, you vary the pressure placed on the nib. Pushing down on the nib as you draw it toward you spreads the tines so more ink flows through the widened slit onto your ‘paper’. Less pressure causes less tine-flexing creating thinner lines. The tiniest hairline strokes are made on upward and side strokes. Thick lines are created by downstrokes.

Pointed nib calligraphy uses sensitive nib pressure adjustments to create a letter. Exerting and reducing nib pressure is a delicate skill. And controlling that pressure is a separate skill altogether. If you put excess pressure on a nib upstroke the tines dig into the paper with bad results.

Pointed nibs also depend on a hard, smooth support. To create a paper surface like that early papers were dipped in a sizing medium, dried, and burnished to a shiny vellum-like surface. A lengthy process.
So pointed pen nib popularity depended not only on steel production but smooth enough paper and operator skill. All coming together at the same time.

Quill production and use came to halt; the steel nib reigned supreme for years. Until the fountain pen then the cartridge pen, ballpoint pen, and following. Today this path even leads us to handwriting’s continued existence. In the future, your calligraphy lettering skills will be more in demand than ever.